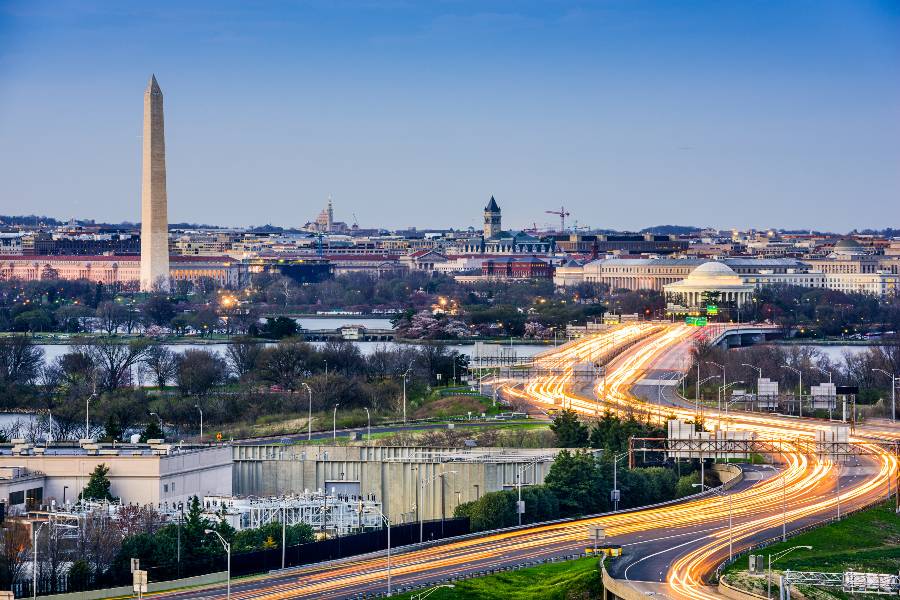 Located north of the National Mall and west of North Capitol Street, there are over 300,000 residents living in Northwest D.C. with a myriad of historical and cultural attractions. Being the largest quadrant, it contains many landmarks such as the White House and Federal Triangle, the Smithsonian, the National Zoo, the National Cathedral, as well as many historic neighborhoods. Also located in Northwest D.C. is the Capital One Arena, a venue for many concerts and live events as well as being home to the Washington Wizards and the Washington Capitals.

Adams Morgan: This lively and diverse neighborhood is known for its spirited nightlife and eclectic food scene as well as a more laid-back family-friendly experience during the day. Locals enjoy the tree-lined streets as well as the eccentric boutiques, and the ethnic cuisine.

Foggy Bottom: Home to the Kennedy Center and the State Department, Foggy Bottom takes its name from the fog that comes off the Potomac in the morning. On the Potomac waterfront, Foggy Bottom also houses Rock Creek Park with an abundance of biking and running trails with riverside views.

Georgetown: Founded in 1751, Georgetown has a rich history as it predated the nation’s capital by 40 years and only became part of the District in 1871. Georgetown is known for its shopping, as the largest outdoor shopping district in the region with local boutiques, as well as its recreational activities along the Potomac waterfront and the Chesapeake and Ohio Canal. The C&O Canal, a National Park that runs 184.5 miles, operated for nearly 100 years as a waterway between Atlantic seaports and the midwest. Today, the canal continues as a popular Towpath for runners and cyclists.

Shaw: Centrally located in the city, Shaw is a diverse social, cultural, and economic hub with rich history as one of the Districts oldest neighborhoods. Rapidly developing, Shaw is hip and trendy with an edgy shopping, food and bar scene.

Upper Northwest: This collection of neighborhoods such as Glover Park, Woodley Park, and Tenleytown are full of greenery, family-friendly, and full of historic homes with great shopping and a cozy restaurant feel. The National Cathedral’s neo-Gothic architecture and beautiful stained glass windows welcomes people of all faiths to the upper Northwest area.

Northwest D.C. is served by all of the six Washington Metro lines: the Orange, Silver, Red, Blue, Yellow, and Green Lines as well as Metro Busses that run through the quadrant and the DC Circulator. Some neighborhoods, such as Georgetown do not have Metro access so cars are the best means of transportation. Cycling is also a popular means of transportation, with the Capital Bikeshare Service having over 350 stations located all around the DMV area.

If you are interested in making Northwest D.C. your home, Choice Property has available and accessible professionals who specialize in ensuring a positive rental experience. Contact us for assistance!